Chained in ropes and shackles for years. Inhumane treatment to deaf and dumb juveniles in Muslim families of rural Bengal. 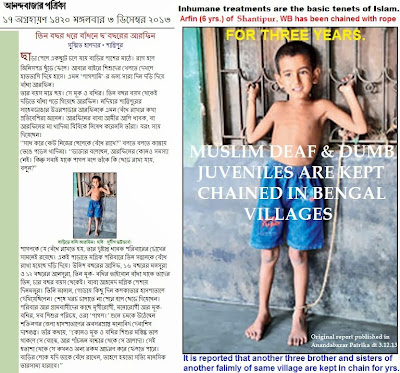 Rana Ray from Krishnanagar (4th December 2013):: It is obviously inhumane and utter injustice to put some juveniles in ropes or shackles as they are challenged persons, very unfortunately. But, in a Muslim village of Sahebdanga near Shantipur (in Nadia, West Bengal, India)  it is an Islamic fashion to put the Deaf and Dumb or mentally incapacitated juveniles in chain as they are simply uncontrollable or misunderstood sometime.

Take the story of cute Arfin of just 6 years. When the boy was detected with some IQ deficiency and had some problems related to speech, his father Ameer Ali and mother Khadeja Bibi decided to keep little Arfin aged only three years, tied with a rope made of cloth.

Though the doctors of Krishnanagar State General Hospital categorically say to the parents of Arfin that Arfin has no major problem at all, the parents of the boy have been keeping tied the boy as an animal kept in the yard. No neighbour of Arfin never contradicted the matter as the villagers of the Muslim dominated village of Sahebdanga think that some ghosts are entered into all physically challenged persons like deaf & dumb, men and women affected to hysteria or mental patients. So, they are actually mad or insane and they should not be kept free anyway. Consequently, Arfin has to continue his up-growing in a hard tie of some ropes made of thick jute yarns. The most of the time Arfin passes his time beside a window tied with knot in the grill of window. Even in night sometime his father ties Arfin with another rope with the stands of the cot where Arfin sleeps.

In the Mallick family headed by a Muslim daily labour Ahamed Mallik of the same village, has another story. Three deaf and dumb members of this family are kept chained with rope. Asif (son of Ahamed, 19 yrs) and two daughters of Ahamed named Mansura (16 yrs) and Ansura (12 yrs), all have been kept chained in ropes since their tender age of 3 or 4 yrs. This locality of Saheb Para is also known as 'pagla bandha para' or 'chained mad area'.

Actually the numbers of physically challenged person in Bengal are maximum of Muslims family. By the grace of Allah, the number of criminals in Bengal are highest also from Muslim community. As a matter of fact the eunuchs and prostitutes are heading fast from the same Muslim community. This is a big reality for Indian sub-continent and partially true for the rest of the world.

Anyway, the matter of gross violation of Child Rights in a persecutor mode by chaining physically challenged in Muslim villages in Bengal rocks the rights forum to some extent. The Paschimbanga Rajya Pratibondhi Sammilani  (A Forum of Physically Challenged Person in West Bengal)  is about to send a fact finding team to Sahebdanga-Uttarpara Muslim village to investigate the matter, as per reports came last.

But, it is obvious that the West Bengal state authority and police are reluctant to look into the matter. They think that strict action against such convention (read superstitions) of Muslim, may invite further communal commotion.  Inshallah!