BAGHDAD | AFP | 22 dec 2013 ::  Five senior Iraqi officers, including a major general, and 10 soldiers were killed Saturday in clashes with insurgents in the west of the country, military sources reported.
Major General Mohammed al-Karoui and the other 14 all died in an assault on “a hideout of the Al Qaeda network” in Sunni-majority western Anbar province near the border with Syria, the sources said.
They were killed attacking a militant camp near Rutba, 380 kilometres west of Baghdad, senior officers said.
When the assault began, the soldiers were hit by suicide bombers, and when they entered buildings several booby traps exploded, the sources said.(Courtesy:Dawn)
Posted by Unknown at 19:58 No comments:

FRANCE RAISES VOICE TO SAY NO TO ISLAM.

Rally against Islamization of France in Paris on Dec 8, 2013.  French people thronged to join the rally to register their voice against Jihad and Radical Islam in Europe. Source: Gates of Vienna. Say No to Islam Right Now.

This march by Résistance Républicaine and Riposte Laïque had been planned for ages. They were pushed around, as usual: no permission, yes permission, no permission, yes permission but somewhere else etc. Then some other marches (so called antifascist, pro-Islamist, and assorted marches) were all given priority — I think it turned out that the laïcité marchers were moved to another street, by far not as popular as the “Bastille”, and that some other “marches” sounding nearly the same were held on the same day.
I also hear that their cameraman got attacked by a “Young French Man”surprisingly of Maghrebian (Arab) origin. Their own bodyguards helped him so he had only minor physical injuries. The shock was probably bigger.
All the media (except a few, such as Radio Courtoisie and a new TV station which will start broadcasting in January) boycotted this march — as they did the last one which attracted more than 3,000 people. Résistance Républicaine and Riposte Laïque estimated there were about 1,000 participants.

Below is a video of a recent demonstration in Paris against the Islamization of France and the assault (mainly by Muslims) on Christianity. Oz-Rita, who translated the clip for subtitling, includes this note:

Email ThisBlogThis!Share to TwitterShare to FacebookShare to Pinterest
Labels: France raises voice to say NO TO ISLAM, French march against Islam, Rally against Islamization of France in Paris

In the next three days, more than 400 people were killed in Bangui alone, according to the Red Cross. Dozens of people bearing gunshot and stab wounds have sought treatment in the corridors of overcrowded hospitals, medical sources said.

The violence started with shots of heavy and automatic weapons on what Msgr. Juan José Aguirre Muños, Bishop of Bangassou, described as “an apocalyptic day”. 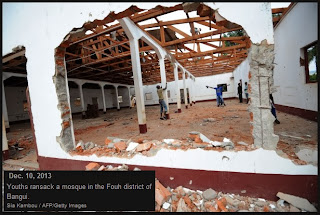 “Early in the morning I was at the airport in Bangui when, all of a sudden, hell broke out. Repeated shots were heard,” he said, as quoted by the catholic news agency Agenzia Fides. “A family in the neighbourhood welcomed me into their home. I stayed there for eight hours while the fighting raged.

At four in the afternoon, the Archbishop of Bangui, Mgr. Dieudonné Nzapalainga, came to pick me up with an escort of soldiers from the African Mission in Central Africa, and led me to the Archbishopric.” The Central African Republic has been beset by violence since March, when a coalition of rebel groups, led by Michel Djotodia under the Séléka banner, drove out President Francois Bozizé.

Djotodia took control of a transitional government, but lost control of Séléka soldiers. He disbanded Séléka in September, but its members continue to loot, rape and murder Christians in particular. Since September, the mostly Christian and Animist local population have formed self-defence groups named anti-Balaka, which have attacked Muslims, in turn inviting brutal reprisals from Séléka and raising fears of inter-faith genocide.

Daniel Greenfield | Frontpage Mag | London | Dec 10, 2013:: A century ago the murder of a British soldier in broad daylight in London would have been an act of war. In this post-imperial and post-everything age, an atrocity leads to a task force which produces a report which is then filed in a desk drawer by the undersecretary for something or other.


Like clockwork, the murder of Lee Rigby led to a task force and to a report. The report is 7 pages long. It’s possible to read it in much less than the twenty minutes that it took London police to respond to the murder in progress. You could even get through it a few times in real time while a Muslim convert who describes himself as a soldier of Allah saws away at a fallen Englishman’s head with no one to stop him.
here is a thing that organizations say when they know that they are hip deep in a crisis. They say that “we are taking this seriously.”
The report, “Tackling Extremism in the UK” certainly takes matters seriously. The evidence of that is not so much in the report, as in the task force which included the Prime Minister, the Deputy Prime Minister, four Secretaries of State, three Ministers, one Chancellor, one Lord Chancellor and a partridge in a pear tree.
Like so many of the more “serious” and “sincere” efforts at tackling the biggest threat to civilization in the twenty-first century, the report mixes occasional good ideas with politically correct absurdities. It starts off by equating Islamophobia with Al Qaeda and rolls out a plan to fight back against Islamism.
Read the rest here: Courtesy: Frontpage.
Posted by Unknown at 22:52 No comments:

Corruption is the Crown of Islam. Eight Muslim majority Countries are among top Ten of the most corrupt list.


The 10 Most Corrupt and Least Corrupt Countries in the World. 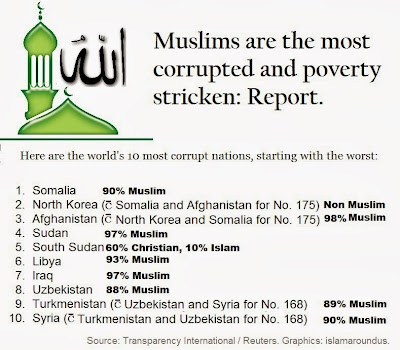 Reuters | Tue Dec 3, 2013:: In some countries, business owners can go their way in the happy knowledge that government officials won't be hitting them up for bribes or tossing them in jail on trumped-up charges. But in other parts of the world, public sector corruption is a fact of life.


Hoping to shine a light on this widespread problem, Transparency International, a non-governmental organization that serves as a watchdog for corporate and political corruption, has published its Corruption Perceptions Index for 2013. The index ranks countries around the world by perceived level of government corruption, with a score of 100 signaling an absence of official corruption and a score of 0 indicating a country that is hopelessly corrupt. Full reading here...
View: Corruption Perceptions Index 2012: TI. 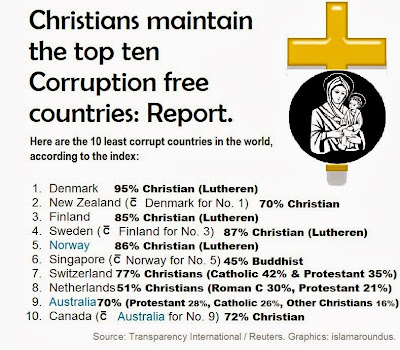 Email ThisBlogThis!Share to TwitterShare to FacebookShare to Pinterest
Labels: Corruption and Islam, Muslims are most corrupt, Transparency International 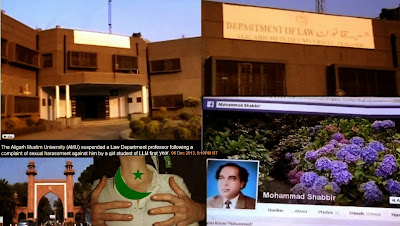 Special Correspondent | Aligarh (Uttar Pradesh), India | Dec 6, 2013:: This is a simple case of proposal about experiencing mufa'khathat (thighing) or hand-job with a girl student of Law Department of Aligarh Muslim University (AMU)  by her professor in the same department. But the situation went public after repeated efforts of that student failured to restrain her professor in law department.

An Aligarh Muslim University professor of Law Department was suspended on Thursday after he was accused of sexual harassment by a first year student of LLM.

However, the complaint has not been filed as `sexual harassment’’, said Shahrukh Shamshad.

The university authorities said after the student complained of misconduct, a preliminary investigation was launched following which the professor Shabbir was suspended.

A detailed inquiry has been ordered into the matter, he added.

According to sources, the university had suspended Professor Shabbir on similar charges of sexual harassment eight years ago on a complaint of US-based university girl student who had come on a visit. After going back to the US, she had lodged a complaint with the US embassy in this regard which was forwarded to the AMU authorities. Shabbir was suspended on the charges then as well. After four months, the inquiry had given him a clean chit and his suspension was revoked.

From a reliable source, it has been confirmed that the accused professor asked the girl students whether she posed a devout follower Islam by maintaining female genital mutilation. As the girl disagreed the matter of female genital mutilation in Islam, the professor started giving various examples of free sex in Islam and described Mohammad, the chief pontiff of prostitution within family and relations.

Hearing such comments the girl student protested all about. But in the lonely terrace of the Department Professor Shabbir started hugging sexually with the girl student with inserting his hands under the Burka.