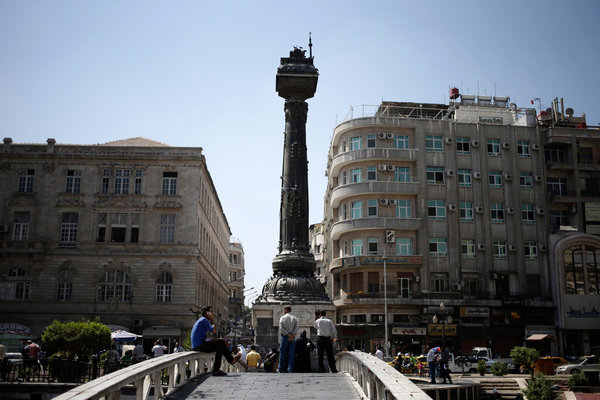 BEIRUT | Lebanon  | 30 Aug 2013 ::  In a narrow alley in the old city of Damascus, a shopkeeper who opposes the Syrian government spent Thursday as usual, drinking coffee with the other merchants who keep him company in place of long-vanished tourists. But the calm on the cobblestone street, he said, could hardly mask the fear and ambivalence over an American military strike.
“Disorder, revenge. Sectarian violence,” he said in a text message, ticking off what he sees as the worst potential consequences of the missile strikes that American officials have threatened against President Bashar al-Assad’s government, which they blame for a deadly chemical attack last week.
In Damascus, as people stock up on food and water and the government closes central streets and moves troops and matériel into residential areas and schools, even staunch supporters of the uprising against Mr. Assad are divided on the looming attack.
Many here feel even a limited strike threatens to inject a new, unpredictable dynamic into a civil war that has largely spared their storied city. And some opponents of the government are loath to see direct American military intervention in their fight, fearful it will hijack and discredit the uprising they have waged for more than two years at great cost.
Though some called early on for NATO intervention, others said they wanted support and arms from Washington — not an attack by the American military.(Copy from:The New York Times)
Posted by Unknown at 00:27