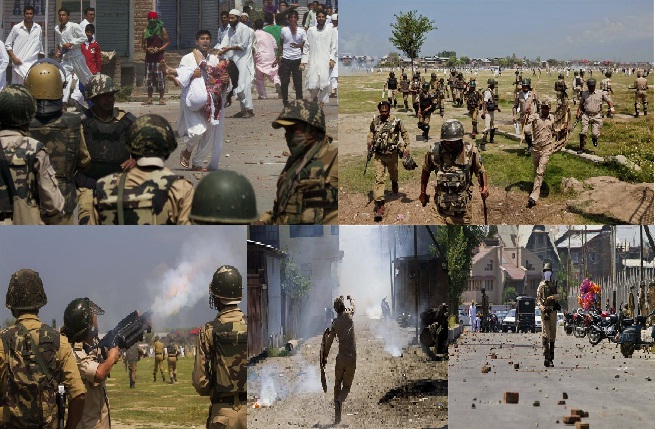 SRINAGAR | India | 09 Aug 2013 ::  Indian forces imposed an indefinite curfew Friday in a town in the Indian portion of Kashmir after firing tear gas and warning shots to disperse groups of Muslims and Hindus who clashed during Eid celebrations, police said.
The army began enforcing the curfew as rival groups attacked each other with stones and sticks, and burned several shops and vehicles in Kishtwar, a town 200 kilometers (125 miles) southeast of Srinagar, the main city in Indian-controlled Kashmir.
Several people were hurt in the clashes, said one police officer, who spoke on condition of anonymity as he was not authorized to talk to reporters.
The trouble erupted after Hindus objected to Muslims shouting raising pro-independence slogans on the Eid al-Fitr holiday, which caps the fasting month of Ramadan.
State Home Minister Sajad Ahmed Kitchloo, who is from the area, escaped unhurt when his motorcade was attacked with stones by the clashing groups.
The state director-general of police, Ashok Prasad, said “the situation is serious and our priority is not to allow the situation to escalate…. We are trying to enforce the curfew strictly.”
Anti-India feelings run deep in Kashmir, where about a dozen rebel groups have been fighting against Indian rule since 1989. More than 65,000 people, mostly civilians, have been killed.
The rebel groups have largely been suppressed by Indian troops in recent years, and resistance is now principally expressed through street protests.
Indian forces also used tear gas and pellet guns to quell thousands of stone-throwing protesters who took to the streets after the special Eid prayers in Srinagar.(Courtesy:Epoch Times)Read More>>>
Posted by Unknown at 12:33