Despite seemingly overwhelming evidence, the Syrian government continues to deny that it used chemical weapons. 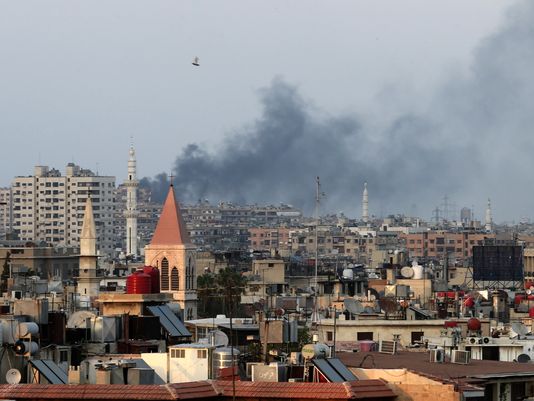 USA TODAY | 23 Aug 2013 :: Some first responders to a reported chemical attack in Syria have died after treating victims, providing more evidence that a weapon of mass destruction was used, opposition forces said Thursday.
"Some of them came down with similar symptoms and passed away," said Khaled Saleh, a spokesman for the Supreme Military Council of the Free Syrian Army, which the United States has provided with non-lethal aid. Saleh said at least six doctors died after treating victims. "We don't have the (total) number of dead first responders yet," he said.
Despite seemingly overwhelming evidence, the Syrian government continues to deny that it used chemical weapons. Three dozen countries, including the U.S., have now called for a United Nations investigation.
Saleh said he learned Thursday that one of the people he had been in touch with Wednesday who was treating people injured in the attack had later passed away.
Between 800 and 1,700 people died Wednesday after a rocket attack on the Damascus suburb of Eastern Ghouta, according to the Syrian opposition, which reported receiving victims in area hospitals and finding more bodies in house-to-house searches Thursday.
Dan Layman, a spokesman for the Syrian Support Group, which supports the Free Syrian Army in Washington, said doctors, nurses and first responders had reported Wednesday that they'd experienced secondary symptoms while working with victims.
"The doctor I was talking to yesterday said the residue on the victims and their clothing was making the doctors get dizzy and have trouble breathing and (they) had to pour water on their faces and had to step out of the room," Layman said.
Layman said he learned Thursday that two of those nurses died.(Courtesy:USA TODAY)Read More>>>
Posted by Unknown at 09:20