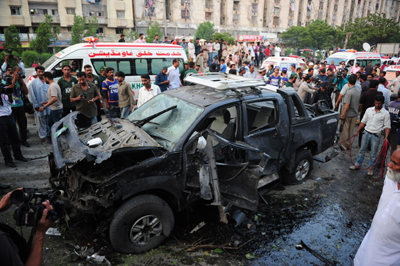 KARACHI | 21 Jul 2013 :: An injured militant who survived a bomb blast on Saturday night told police interrogators on Sunday that he and his accomplices belonged to Lashkar-e-Jhang (LJ), a Sunni extremist banned group responsible for innumerable sectarian and terrorist attacks across the country.
The injured militant, Imran, was arrested from the hospital by police after the bomb blast in Patel Para leaving three of Imran’s accomplices dead.
He told the police that they were all residents of Lines Area, a neighbourhood not far from Patel Para where the bomb went off.
The three dead militants were identified as Subhan, Naeem and Mateen.
The wife and the children of Mateen were on the lower storey of the building when the bomb ripped through the apartment
The suspects hired the house on the third floor of a private residential complex for preparation of terrorist attacks. Television footage showed pieces of human flesh and blood sticking on the walls and rooftop of the apartment. The apartment was hired at PR18,000 (Dh650.50) a month, the police said.
Imran told the police that the explosive material went off while the militants were trying to modify the device.
Police were also trying to trace the links to another bomb attack in which a municipal commissioner was targeted. The bomb planted in a motorcycle was detonated when Matanat Ali’s car was passing through the Eisa Nagri. The powerful bomb tore through the vehicle but Ali survived the impact and sustained injuries.
However, a security guard succumbed to his injuries in the hospital later.
Karachi has been witnessing a rise in militant attacks in recent weeks. Earlier, the terrorists carried out motorcycle bomb attacks on senior high court judge Maqbool Baqir who survived the attack but nine of his guards were killed.
Terrorists also killed the personal security guard of President Asif Ali Zardari when he was making purchases for Ramadan.(Courtesy:Gulf News.com)
Posted by Unknown at 11:12