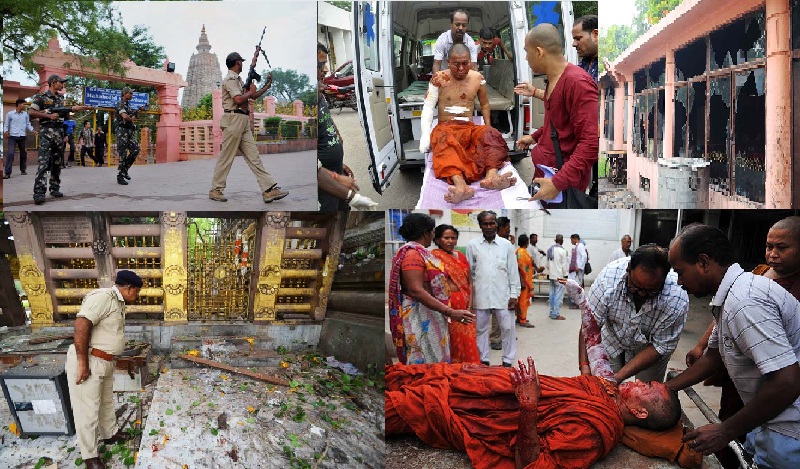 Bihar chief minister Nitish Kumar was left squirming because the low-intensity blasts, triggered by suspected Indian Mujahideen operatives, occurred despite repeated intelligence alerts from central security agencies.
“It does seem like a terror attack... No (terrorist) outfit has claimed responsibility,” Union minister of state for home RPN Singh said about the string of blasts between 5.30 and 5.58am.
Buddhists from all over the world visit the temple, which has the Bodhi tree under which Buddha is said to have attained enlightenment. “The holy Bodhi tree is safe and there is no damage to it,” said Bihar director general of police Abhayanand.
The police said four blasts took place inside the Mahabodhi temple complex and three occurred at the Terega monastery, while one each were triggered near an 80-feet-tall Buddha statue and a vacant tourist bus parked close to the temple complex.
The police said two live bombs were defused in the town and a third in a village nearby. According to intelligence sources, Bodh Gaya has been in the crosshairs of Pakistan-based terrorists who want to avenge the violence against Rohingya Muslims in Buddhist-dominated Myanmar.
The improvised explosive devices were set off with timers within a 2 km radius of the 18 sq km town located about 140 km southwest of capital Patna. While IM operations are unknown in these parts, Gaya is the hotbed of Maoist activity in Bihar.(Courtesy:Hindustan Times)Read More>>>
Posted by Unknown at 11:15